A GRAPHENE HAND THAT MOVES WITH LIGHT 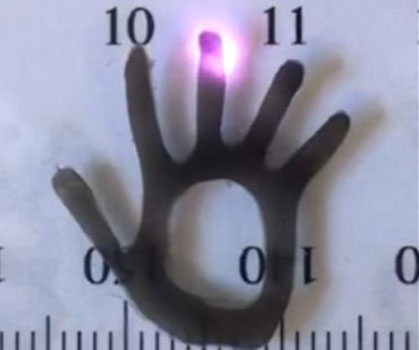 Researchers at the Berkeley University developed a new photosensitive gel that could open up new scenarios in the field of soft robotics.

Researchers at the University of California at Berkeley took inspiration from the vegetal world to create a new hydrogel capable to bend and move if stimulated with an infrared light beam. The mechanism at the basis of this reaction is similar to the one by which plants tend towards a light source (phototropism) to access the best possible radiation, except that gel moves instantly.

In order to achieve this, the team combined layers of graphene and elastic synthetic proteins, thus creating a soft material designed with a more porous side to let fluids through more quickly. When struck with light, graphene generates heat and warms up the proteins, which are stimulated to release the water absorbed at ambient temperature. Such water is expelled through the more porous side, thus causing the gel to bend quickly and reversibly.

Using hydrogel, the researchers managed to create a hand-shaped 2-cm structure, which bends its fingers when stimulated with light (watch the video), as well as a 1-cm one similar to an earthworm, which moves by “creeping”. The tests were performed with the material soaked in water.

This finding could have important applications in the emerging field of soft robotics, which studies “soft” robots – inspired by curvy animals like squid or sea stars – capable to penetrate into narrow spaces or to grasp delicate objects. In the future these robots could be operated through light.