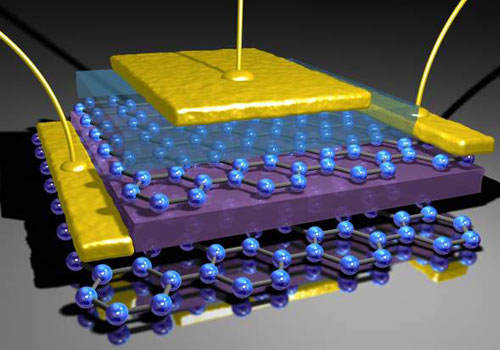 The first graphene-based transistor was created at the Manchester University. Its ability to fluctuate between two different electronic states and emit high-frequency electromagnetic waves makes it fit for use in the fields of security and diagnostic imaging.

The first graphene-based transistor that fluctuates spontaneously between two different electronic states, emitting high-frequency electromagnetic waves, was created at the labs of the Manchester University.

The device, described in the scientific review Nature Communications, could find important applications in the field of security (e.g. airport scanners) and diagnostic imaging.

How does it work? The key of the device is in its “bi-stability”, i.e. the ability to move like a swing between two different and equivalent states. Minor disruptions in the system act as a push and can trigger spontaneous switching.

The transistor is made of two layers of graphene (the swing) separated by a thin insulating boron nitride barrier. As moderate stress is applied (push), the system changes its state: the electronic clouds of both layers of graphene “tune in” and cause the electrons to move spontaneously at high speed between the layers, crossing through the insulating “carrier” barrier due to an effect known as quantum tunnel.

The quick electric charge movement results into the emission of high-frequency electromagnetic waves, from radio waves to infrared waves, which make the transistor particularly suited for the above applications, as well as an integrating component for conventional chips, to provide brand new functionalities.

The Editorial Staff
Published on Tuesday, May 14, 2013