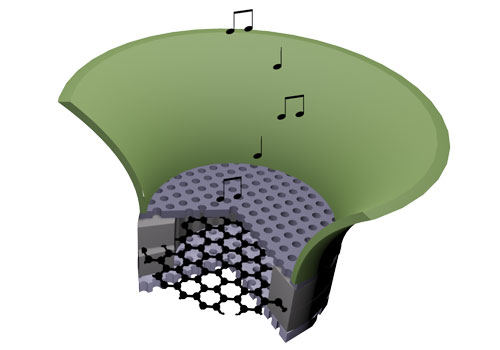 The nanodevice, created by a research team at the Columbia University, will open up innovative scenarios with possible applications in the wireless systems of smartphones and tablets.

The world’s smallest FM radio transmitter was recently developed at the labs of the Columbia University. A research team, headed by professors James Hone and Kenneth Shepard, used the surprising strength, elasticity, and electric conductivity that are peculiar to graphene to create a miniature version of a specific electronic component known as VCO (voltage controlled oscillator), which allows to generate a frequency modulation (FM) signal identical to the one used for radio broadcasting. The study was published in the review Nature Nanotechnology. Click here to read the abstract.

The prototype, currently adjusted to a frequency of 100 megahertz (the FM radio frequency band ranges from 87.7 to 108 MHz), is by far the smallest system of its kind. To tune the output signal, Hone and colleagues used pure tones, as well as songs, which were then reproduced by a common radio receiver.

This achievement paves the way towards an improvement of the wireless transmission process and the design of ultra-thin and ultra-efficient mobile devices. In fact this device could find important applications in the wireless systems of smartphones and tablets.

“Following the on-going miniaturization of electric circuits, today’s mobile phones have a greater computing power compared to old systems, whose bulk was such as to fill whole rooms,” says Shepard. “However, certain types of devices, particularly those involved in radio-frequency signal creation and processing, are much more difficult to reduce in size. These components are very bulky and consume significant amounts of power. Moreover, they can hardly be tuned, and require multiple copies to cover the range of frequencies used in wireless communication.”

On the other hand, the graphene transmitter can overcome both barriers: it is very compact, can be easily integrated with other electronic components, and its frequency can be tuned on a broad scale.

The team is now working to improve the performance of the innovative oscillators to reduce background noise and promote integration with silicon circuits.