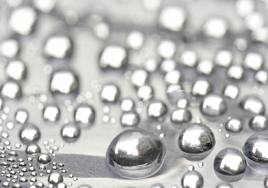 We face the infinitely large in awe. But the infinitely small is also awesome. After all we happen more often to be struck by a tiny virus than to run into a meteorite. This is while nanotechnologies arouse some distrust, but it is important to note that painstaking work is being carried out on control processes. Did you know that even toothbrushes could have nanotechnological properties?

Why is it important to follow the progress of nanotechnologies? Because, for example, like a tiny bacterium can penetrate our body, future nanodrugs or – more frivolously – nano-beauty creams, may be able to do the same.

Nanotechnologies have a broad variety of applications, ranging from car and bicycle tires to fabrics and to water purification, just to name a few. Therefore it is worth knowing something more about them to dispel fears and biases on future uses, even at the cost of dealing with a few complicated numbers.
Works are under way at an international and, particularly, European level to update and review protocols and definitions as scientific research develops. Below is the current definition, which will apply until 2014.

Nanotechnologies are innovative systems for matter manipulation and control on a nanometric scale, aimed at producing new materials, structures, and components – nanomaterials. The European Commission’s Recommendation of October 18, 2011 defines these as “components sized between 1 and 100 billionths of metre.” The nanometre (nm) is, in fact, a length measurement unit corresponding to one billionth of metre, equal to one millionth of millimetre (which used to be known as millimicron). More generally, ‘nano’ is a prefix that multiplies the measurement unit it is applied to by 10-9 (equal to dividing by one billionth).

Nanomaterials are natural, ancillary, or artificial materials in the form of particles, either free-standing or as aggregates or agglomerates, with at least 50% of such particles having one or more external dimensions in the 1-100 nm class of magnitude. The adopted definition is therefore based on an approach that considers the dimensions of the particles constituting the material, rather than the associated risk.

As mentioned, this definition will be reviewed in 2014 in the light of technical and scientific progress, as well as of consultations that are still under way within the ad hoc European teams.
Meanwhile, the applicable definition is aimed at all the stakeholders, governments, citizens, and industrial associations to cast some light on the multiple definitions now in use in the different sectors.

In fact, such definition ensures a homogeneous approach in the enforcement of appropriate rules on the health, physico-chemical, and biological safety of the workers involved in the entire production and distribution pipeline of nanotechnologies and of end users, including consumers and health operators. Thus, on one hand, the Member States of the European Union can decide in a harmonized and clear manner which materials call for specific processing by means of an appropriate legislation, integrating the existing one, and on the other industry can rely on a consistent legal framework, in addition to more accurate consumer information.

RISK ASSESSMENT
According to the Ministry of Health, with respect to worker well-being and safety nanomaterials should be intended as intentionally lab-created or industrial products, thus excluding natural particles and anything produced by man by chance.
In this respect, the production of nanomaterials can either follow a top-down approach (obtain an item in the nano-scale and desired configuration from the corresponding bulk material) or a bottom-up approach (i.e. assemble smaller sub-units in order to obtain the corresponding item through processes similar to chemical synthesis).
This last production process is mostly used in biology, biomedicine, and chemistry. In general, knowing the production technique is important for the workers involved in the production pipeline, including disposal and/or recycling, because the potential risk associated with a nanomaterial or nanotechnology can change according to the implemented technique. For the same reason, it is important to know the nanotechnology as applied to an end product to obtain specific physical and chemical features, biological properties, as well as usage mode and destination, in order to minimize as much as possible the occurrence of associated accidents or inconveniences.

This is why the European Commission invited the Member States to take a responsible approach to the development of activities related to nanomaterials and nanotechnologies, and to operate in compliance with the “cautionary principle,” i.e. apply the highest protection level in each individual production and usage sector, pending further developments in nano-scientific know how.

WHAT IS GOING ON
Based on this EU policy, the General Directorate for Medical Appliances, Pharmaceutical Services, and Safe Care of the Ministry of Health consulted with the Nano-Reach group of the Prevention Directorate and strengthened the sector study, promoting the establishment of a national network for scientific nanotechnologies c/o the Higher Health Institute, in charge of sharing the results of research on nanomaterials and nanotechnologies in Italy. It further enhanced communication with the industrial trade associations, particularly with AIRI/Nanotec IT (the Italian Centre for Nanotechnologies) by participating to the drafting of the CodeMeter (code of conduct for the sector of research for sustainable development), as well as with Unipro (the Italian Association of Beauty Product Companies).

NANO-SILVER
The above demonstrates that close focus is made on the issue. For a practical example, let us consider nano-silver.
Silver in nature is known as one of the substances in human history with the best antibiotic properties. Silver is available in nature. It is anti-toxic and anti-allergic, and in fact we all know about the existence of toothbrushes whose head is enriched with this element. Silver is a strong antibiotic drug and works as a natural prevention agent against infarctions because it counters viruses and fungi that need to metabolize their oxygen. Here are some trivia.
Ancient populations stored water in silver containers, alchemists associated silver with the moon and took it in great account, immigrants to America put a silver coin in milk containers, the Catholic church used silver goblets for the holy communion.

The project Nanotox: Toxicology of chronic exposure to engineered silver was launched in June in order to evaluate the opportunities offered by this material. The project is partly funded with tenders of the Cariplo Foundation and is focused on the analysis of the impact of nano-silver on man’s health.

The project will last two years, and involves a cross-disciplinary team, including the Centre for Interfaces and nanostructured materials of the Milan University (co-ordinator), the Department of Pharmacology, Chemotherapy, and Medical Toxycology, and the Department of Animal Diseases, Hygiene, and Public Animal Health – also reporting to the Milan University, the Humanitas Foundation, the Filarete Foundation, and AIRI/Nanotec IT.

Such outstanding team will have to evaluate a process with major potential implications in sectors that are very important to man, including toiletries, beauty products, medical products, textiles, plastics, electronic appliances, building products, paints, food packaging, paper, products for the environment, and even the reclamation of … golf links.

For a comprehensive approach, the Ministry of Health is also launching a census of nanomaterials contained in beauty products to collect information on the production of beauty products containing nanomaterials at a national level. The initiative, based on the European Commission’s guidelines, is aimed at evaluating the rate of use of nanomaterials, as well as the practices and methods for management and evaluation of related security issues in this broad sector.

Research is going on, and so are controls. It is important to collect as much information as possible on something that is becoming part our lives (and that, in this case, is not so easy to see with a bare eye).